Meon Shore consists of a series of low cliffs that work in an on-shore breeze and offers a fun flying site that is local to many club members. It is an extremely sensitive site and the utmost consideration by pilots on the impact on other beach users is required. The ownership of the land here is unclear but Fareham Council has made it plain that we are tolerated as we make no impact. Pilots need to be aware that we have no formal agreement to fly from the landowners. Effectively this is an unofficial site and pilots are personally responsible for flying here and must deal personally with any incidents that they become involved in.

Due to the sensitive nature of the site as well as a number of flying accidents and damage caused to the nearby beach huts, it must only be flown by experienced pilots with good launch and landing techniques who are fully aware of the contents of this site guide which outlines the novel techniques needed and hazards of this site.

The site is to the West of Hill Head Harbour and parking is on Cliff Road. Park as near to the toilets as possible and then walk along the beach, travelling West, past the Chalets (these have private beach areas on the seaward side.) At the last of the beach huts you will see the low cliffs. Take off is below these.

Plenty of free parking along the beach-front to the East of the site and by the toilets. 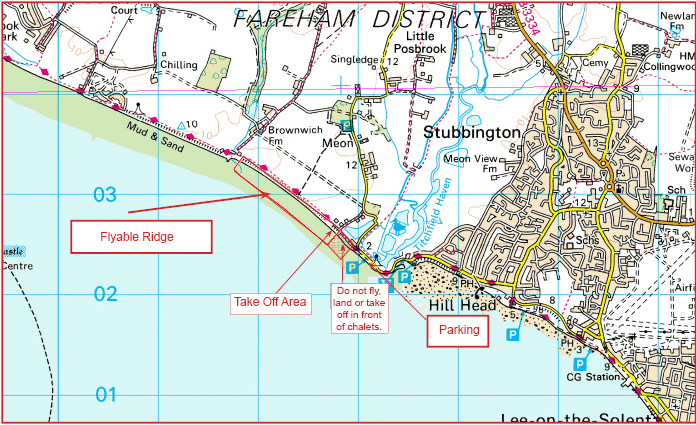 Check state of tide allows for room to land. High tides can reach the cliffs and although shallow, there is a possibility of drowning.
The beach gets busy with walkers, families (having picnics and BBQ’s) and is also a popular nudist beach.
Rubbish on beach and sharp stones can damage lines and canopy.

15 Minutes prior to take off the Solent Airport Control Tower must be called on 01329 824749 and permission to fly obtained. A call will also need to be placed when flying has finished for the day (if the airport is still open).

You may fly outside of these hours without notification. An answerphone will respond if you call and the airport is closed.
The airspace is from the surface – 2000ft. 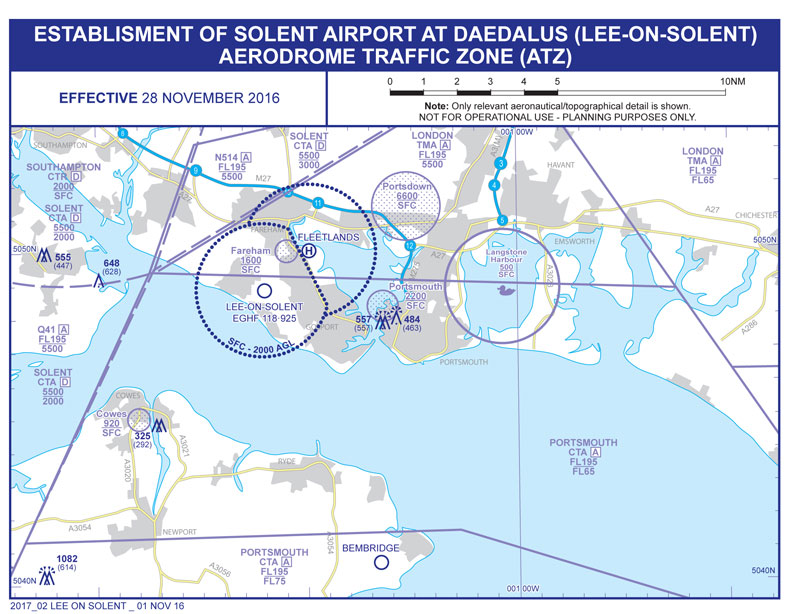 Preferably a first flight here should be in the presence of a competent pilot who has experience of this site. Many pilots have misjudged the strength of the wind and lift and crashed here.
Due to the narrowness of the beach, this site should (normally) only be flown during low tide. Be aware of the state of the tide and check tide tables prior to visiting the site to ensure you will have enough beach to land on when flying is completed.
Before taking off in stronger winds, its advisable to check the wind strength on the top of the cliff as it can be deceptively low on the beach. White-horses on the sea means its too strong for a standard paraglider.
Due to the lowness of the cliffs and the associated cliff-rotor combined with the limited clear space at the top, it is normal to take-off from the beach. Take-off can be anywhere along the beach beneath the cliff. Be aware that the seaweed and rubbish on the beach can easily tangle lines and sharp stones on the beach can strip and sever lines.
When launching, always face away from the cliff ready to head away as it is easy to misjudge the wind and lift strength and get sucked into the cliff or over the top of the cliff.
Take-off by inflating your wing on the beach, well away from the cliff. Keeping your wing above your head, move slowly backwards towards the cliff until you start to feel the wing beginning to lift. At this stage, crab sideways in the upwind direction and slowly towards the cliff. If the wind strength is low it may be necessary to run to get airborne.
Once airborne, continue flying along the cliff and crab slowly towards the cliff to establish yourself in the lift band, but make sure to move further away from the cliff as you gain altitude to prevent being sucked into or over the cliff.

Be wary of the venturi especially in strong winds, it can be surprisingly strong and has caught out many pilots. Ensure you’re practiced at collapsing your wing in strong winds and never go as far as the beach huts/chalets.
Ensure the tide is sufficiently out so there is space to land safely – it can be very dangerous to drop your wing in water, even in the shallows due to the weight of water inside.
Landing is usually at the edge of the cliffs as they start to drop. Keep well in front of the cliffs to leave the lift band without going too far into the venturi at the side of the cliff and to give yourself space to safely collapse your wing.

The Cliffs can be surprisingly lifty and  pilots can venture quite far out to seaward. Remember that you are sandwiched by Southampton airspace to the West which we are not allowed to fly in, so whilst it is possible to bridge the gap over the outflow of the Brownwich Stream and towards the caravan park, this airspace needs to be taken into consideration.